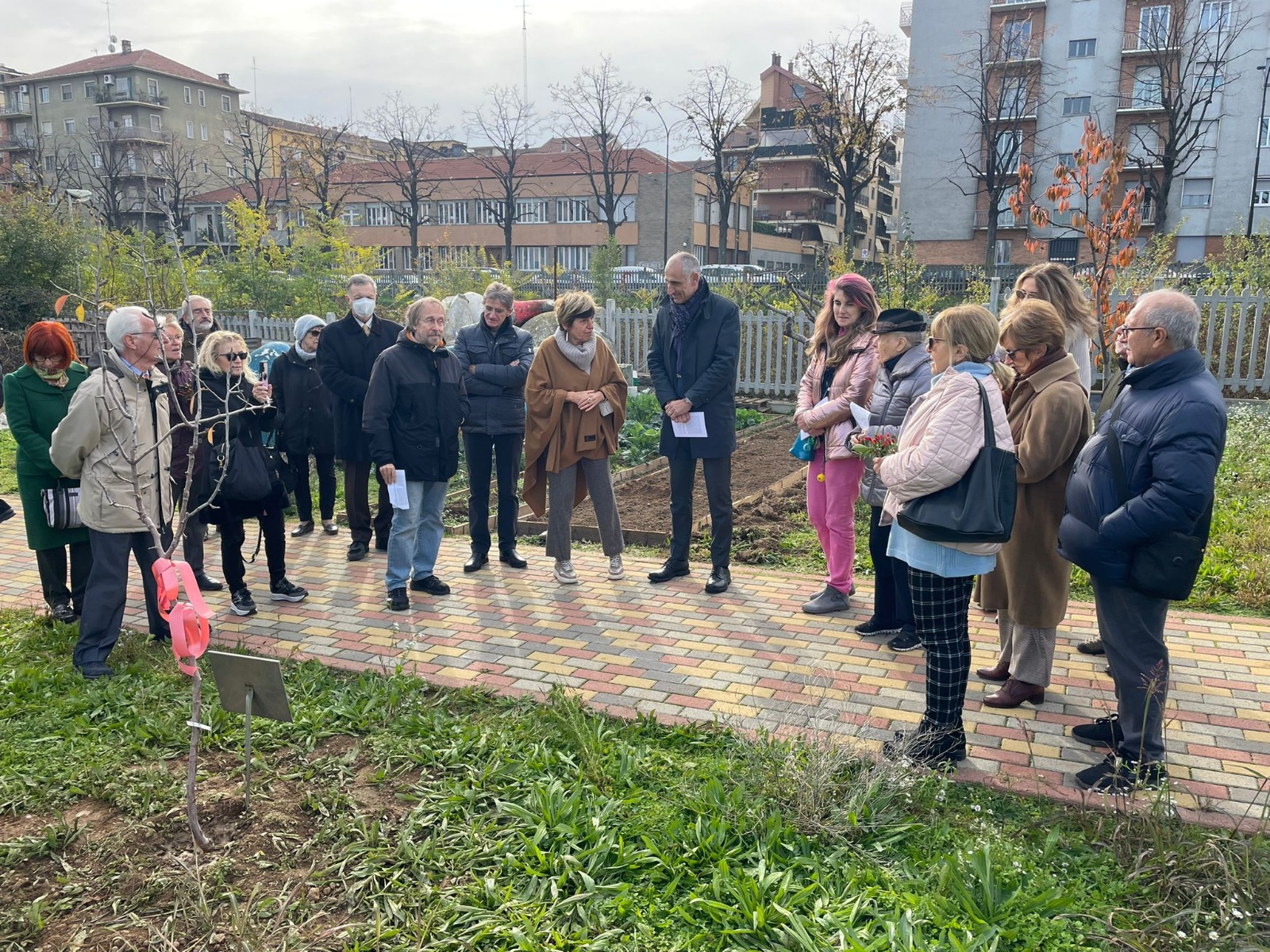 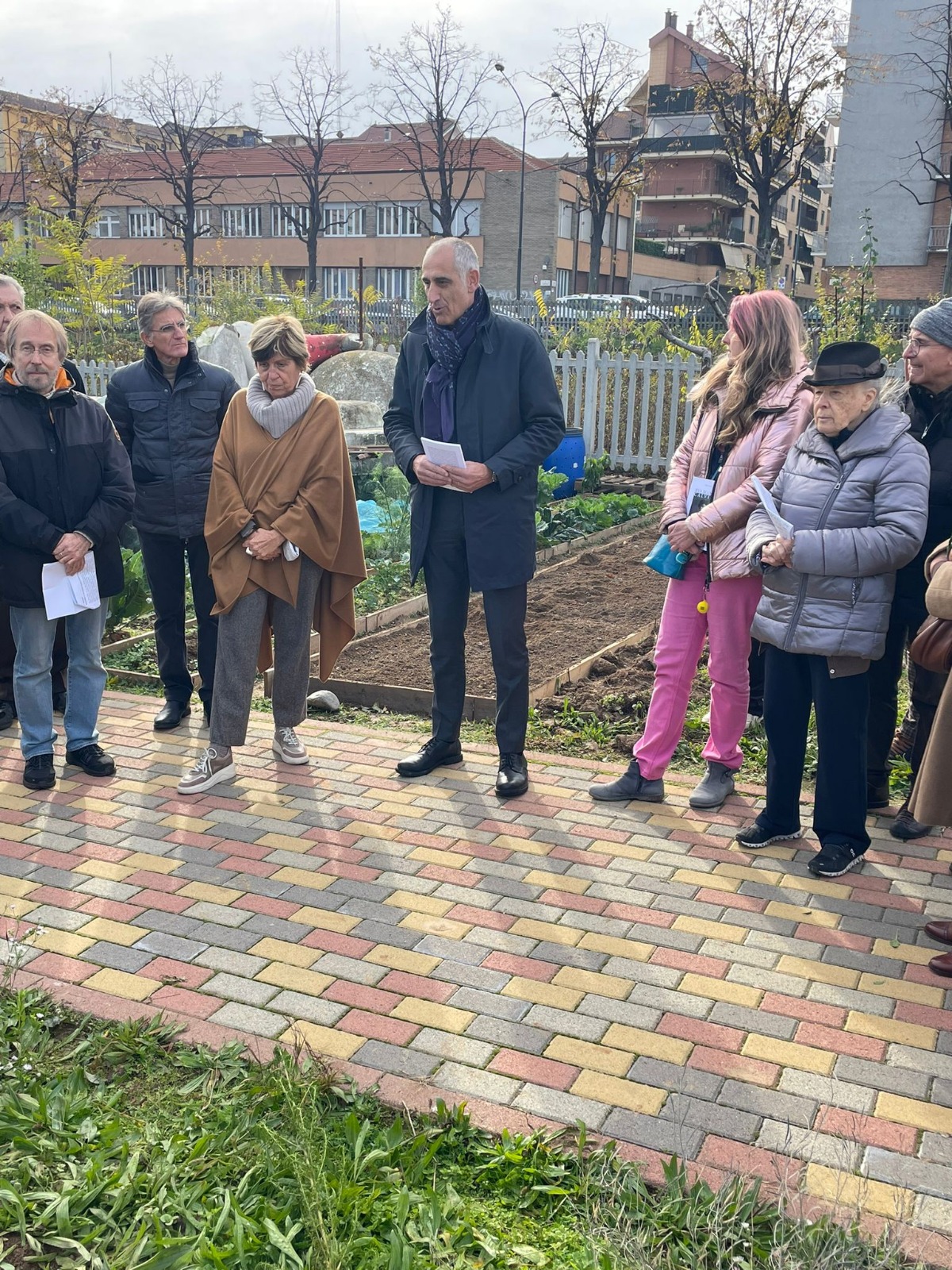 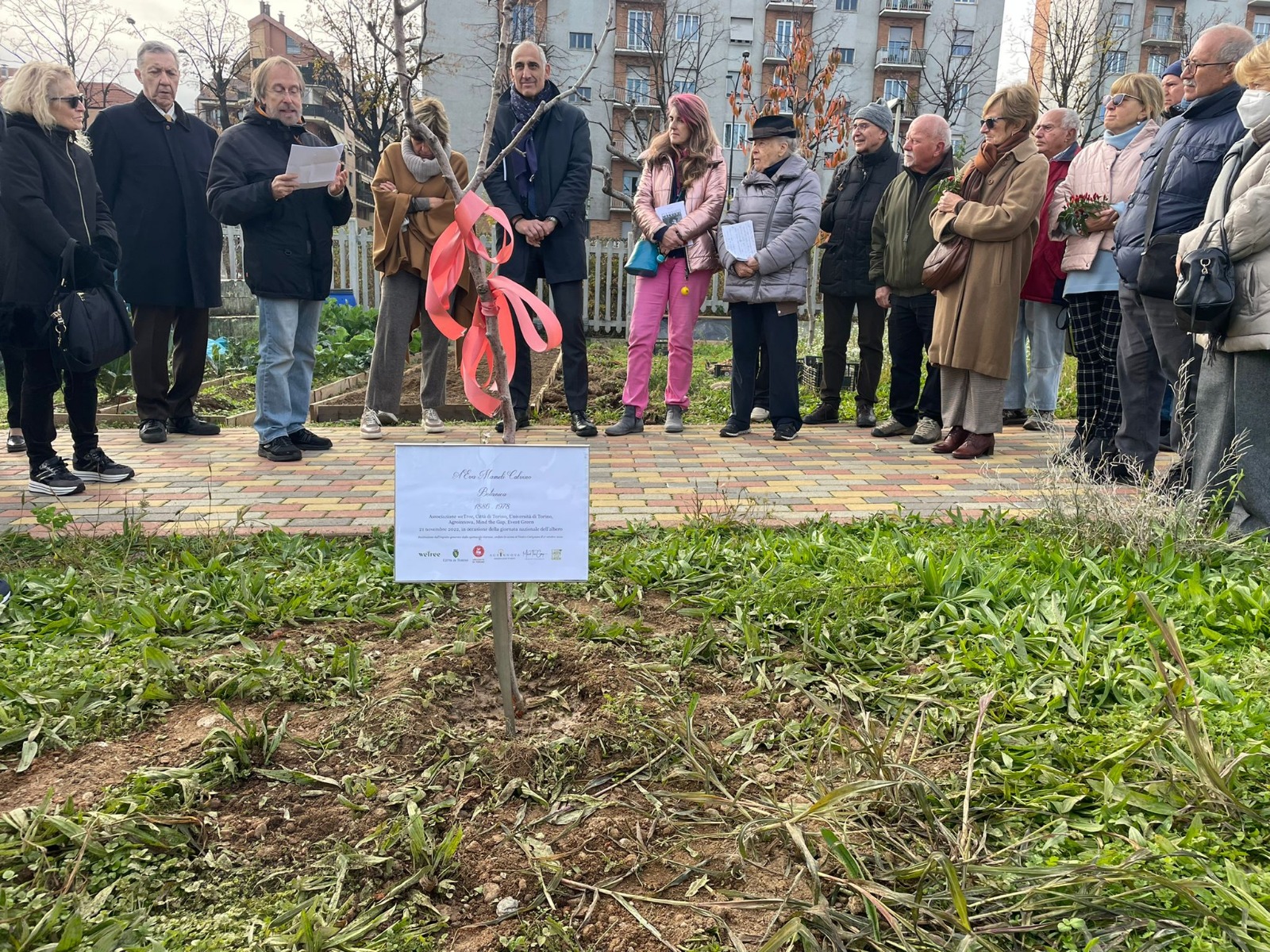 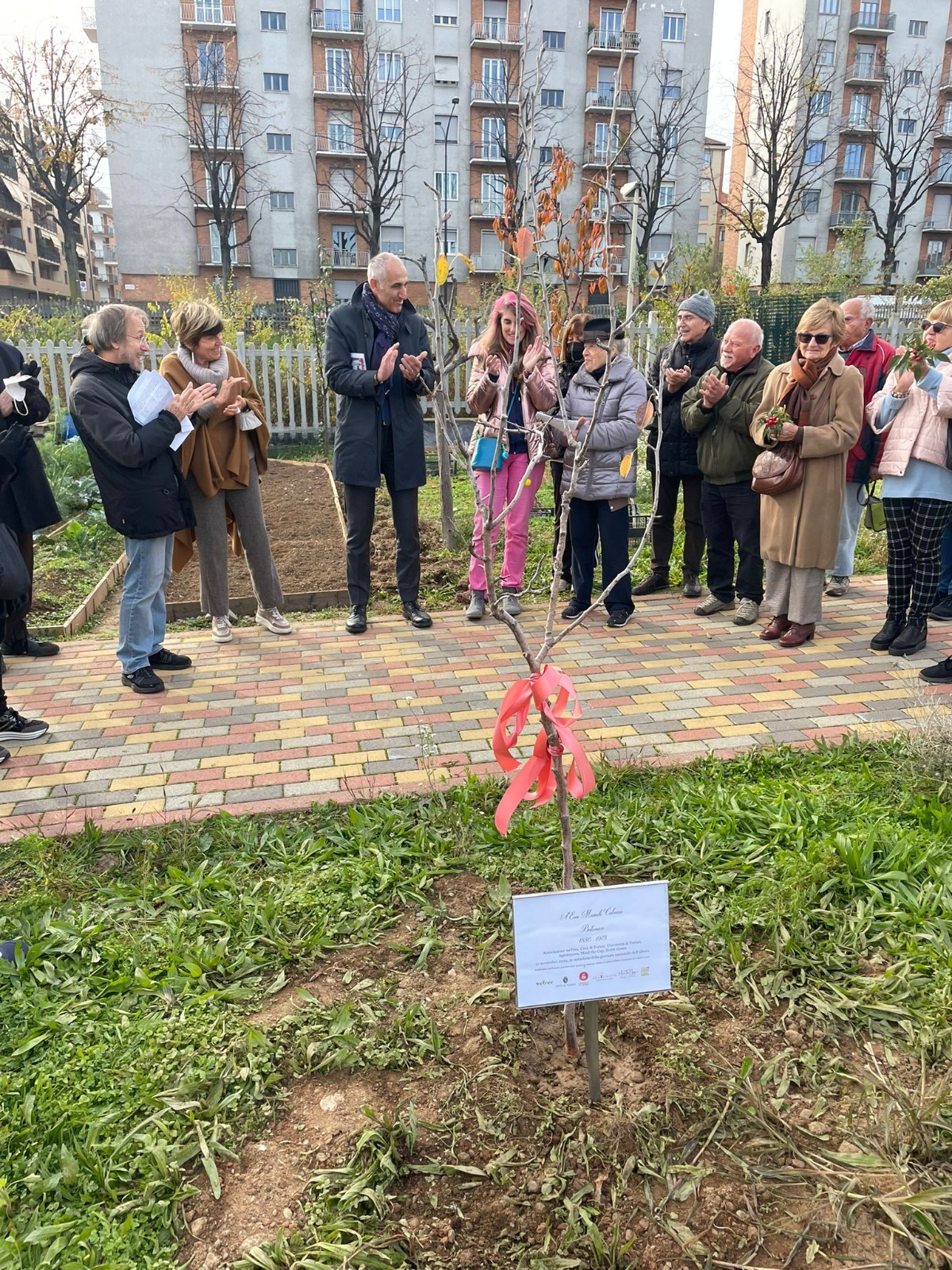 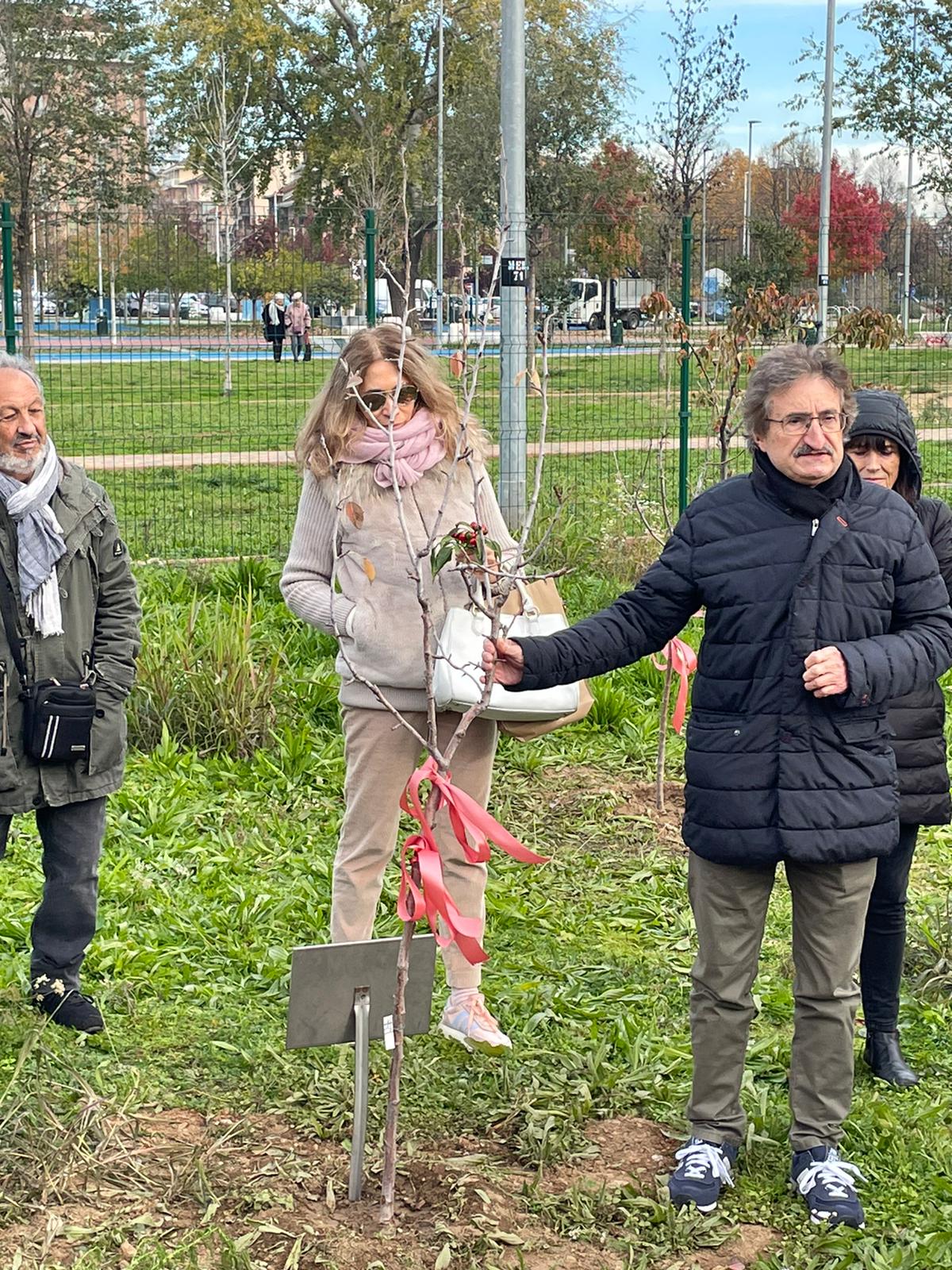 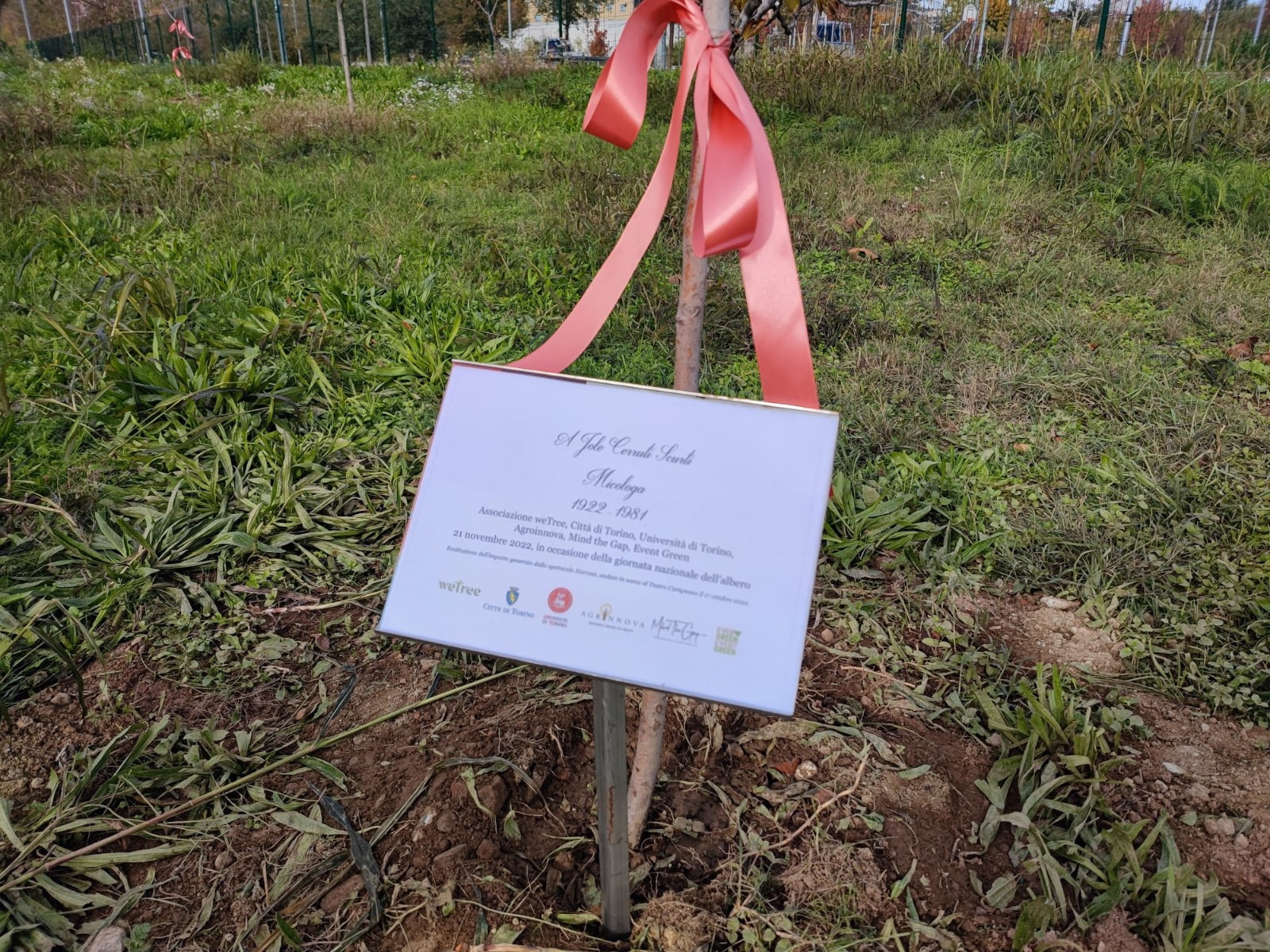 21 November 2022 was the day chosen for a memorial ceremony in Turin’s Mennea Park in honor of two great researchers who worked in the field of mycology, plant pathology and botany. During the ceremony, six fruit trees of ancient varieties were dedicated to them, in the presence of Engr. Francesco Tresso, Councilor for the Environment of the Municipality of Turin and many institutional representatives.
A remembrance of the two scholars, outlined by those who knew them well, was read by Bruno Maria Ferraro, an actor with the Tangram Teatro Turin theatre company.

In photo No. 1: on the left Bruno Maria Ferraro, Tangram Teatro actor (readings on the two researchers) – Maria Lodovica Gullino – Francesco Tresso, Councillor for the Environment of the Municipality of Turin – Alessandra Aires, Vice-President of Volo 2006, Association of Volunteers of the 2006 Olympics and co-signer of the pact of collaboration for the management of the Mennea Park – Elena Accati, former professor of floriculture at the University of Turin, author of a book about Eva Mameli Calvino – volunteers from the participating associations, people related for different reasons to the two researchers, residents of the neighborhood.
In photo No. 5: Maurizio Ceruti, son of Professor Jole Ceruti Scurti, recalled his mother by recounting her life and her most significant research work. 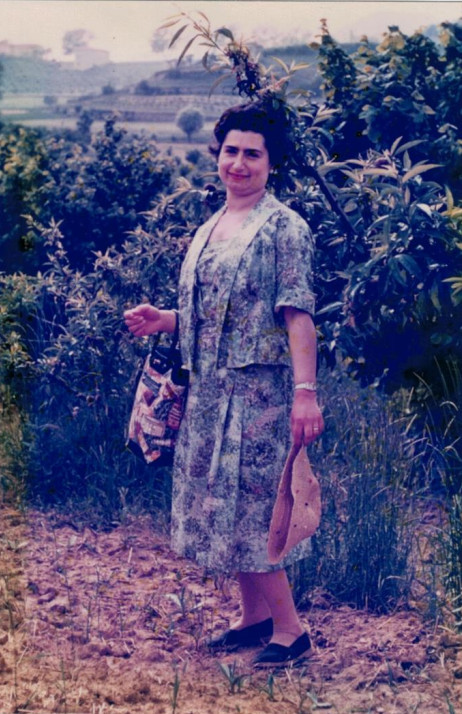 Jole Ceruti Scurti was “the Lady” to everyone at the Botanical Garden. She would arrive in the morning, smiling and greeting everyone cordially, pass through the janitors’ room on the ground floor and pick up two baskets filled with clean tubes that she would take upstairs to the laboratory, where substrata were prepared. She would then greet “Madam Manon” and lightly climb the stairs, carrying her two baskets. She spent her days between her study, characterized by the clutter typical of people who work intensively, the adjoining laboratory, the kitchen where substrata were prepared, the classrooms and the library.
They were solemn moments when she opened the doors of the “mycotheque” in which hundreds of strains of fungi were kept. To the study of so many of those fungi Jole Scurti devoted her all too short life. She would delicately pull out the boxes in which the tubes with fungal cultures were kept. She knew absolutely everything about each and every strain. And only to the most trustworthy students would she entrust their transplantation, but only once she was satisfied with the accuracy of their work. Because every step, sterilization by flaming included, was important to ensure the survival of the precious cultures.
Preparing the substrata (amounting to liters, even hectoliters, over the years), filling the tubes with the right amount of malt, tilting them to allow the agar to solidify, were all key moments. And then the transplantation of the fungal cultures, in those sterile chambers where we ourselves would melt down too, because of the extremely high temperatures. And the cotton plugs that had to be perfect, to ensure sterility, but elegant as well. We were very careful when preparing the tubes, because the plugs had to be perfect, just as “the Lady” had taught us. Woe betide anyone who made them haphazardly or too fluffy, as then they would catch fire in the Bunsen flame. And then the transplantation, to be carried out with the utmost care. In fact, any pollution would have been an intolerable disgrace that would have scarred us for life. There were gallons and gallons of malt agar prepared, and thousands and thousands of tubes laid out, all beautifully, perfectly aligned, like so many toy soldiers. Only tilted, not standing at attention.
Sometimes there were so many malt tubes that one did not know where to set them! So many boxes of transplanted fungal cultures! And when one was really good, as a prize came the box of “dermatophyte” fungi to be transplanted, a sign of extreme confidence. The very precious boxes, containing not-so-easy-to-handle fungal cultures, did not sit with the others, in the cupboards of the mycotheque, but in a cabinet under the sink of the “Lady’s” study.
A most precious collection, to be entrusted only to expert hands. And then those fascinating practical sessions, carried out in the nearby laboratory. With us discovering the secrets of the fungi that the “Lady” knew to perfection. Of each fungus she would tell us the history, the characteristics, the role, an anecdote. Some were dangerous pests to humans, plants, animals, … others were beneficial microorganisms.
After so many years, how many times have the lessons learned during those practical sessions echoed in my mind when encountering a new pathogen in my line of work. And then the lectures, when we would start with a specific topic. But then the enthusiasm and the knowledge of the lecturer was so great that we went on endlessly. Fortunately, the Mycology lectures took place in the late afternoon and we could stay as long as we liked.
And despite her many commitments Jole Scurti always found time to listen to us, to check our results (which thrilled her when they were positive), to review our papers dozens of times and to stimulate us. For each of us, she always had a kind word, a compliment, an encouragement. And then, late in the evening, the “Lady” would come down, carrying two baskets, this time full of dirty tubes to be washed.
By 1980, her walking had become slower and more difficult. But her smile was always the same. These are my recollections, similar to those of many other former students of Jole Ceruti Scurti: beyond her knowledge of how to deal with innovative and interdisciplinary research topics, back in the 1960s and 1970s, topics that ranged from the ability of some fungi to degrade complex molecules, to the production of antibiotics of pharmaceutical interest and of mycotoxins, I like to remember the simplicity, humility and kindness that characterized her life, until her last moments. Because the “Lady” was a true lady, who instilled discipline and rigor, mainly by her example, in guiding and training many students who now, years later, remember her with great affection, fondness and gratitude. 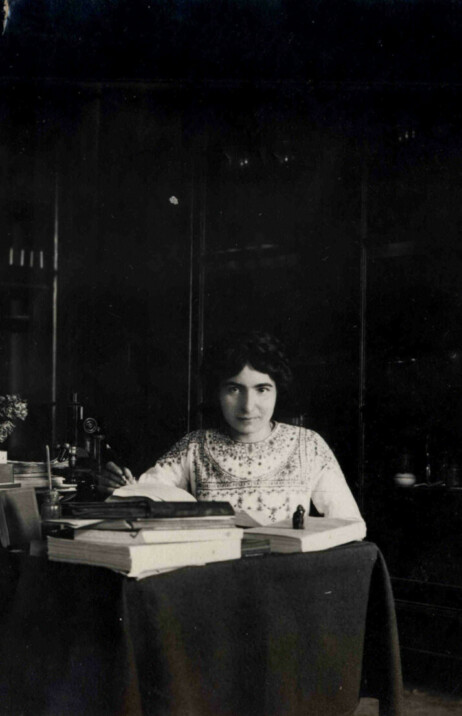 I had been an agricultural graduate for several years and was doing, back in 1976, like almost everyone at the beginning of their university career, a double job, one for “pleasure,” that is, research, the other to secure an income. In the 1960s, the Institute of Horticulture and Floriculture had been established at the Faculty of Agriculture of the University of Turin. I had done my dissertation in floriculture at this institute and had remained there dealing with flower crops.
Prof. Pierluigi Ghisleni, director of the Institute, thought it was important to meet in person those experts we had been learning from during our training by reading and studying their works. So one day, I found myself on the train to Sanremo, happy, but a little worried about what I could and would ask Eva Mameli. I didn’t want to spoil anything about that meeting.
The walls covered with bougainvillea, the blue of the morning-glory whose vines wound like lianas, the dry stone walls, the gray-green of the olive trees, the greenhouses that covered a vast portion of the hillside seemed familiar presences to me.
Eva Mameli had recently turned eighty. Living in Villa Meridiana, she represented for those dealing with floriculture a kind of mythical character: she had traveled extensively, and had worked in numerous areas of botany, biology and physiology, achieving very prestigious results. She regularly worked six to eight hours a day, although she had now been retired for eight years. “Work, research, and floriculture have been my and my husband’s great passions,” she said, and that reminded me of a phrase by Primo Levi: “Loving one’s work represents the best, most concrete approximation of happiness on earth.” I was amazed by Mameli’s liveliness, her intellectual curiosity: she was not talking about herself, but asking questions about what we young people in the Turin group were doing at the time in our floriculture research. For her part, she told me that she was working on the nomenclature of cultivated and wild flowers in different languages: Latin, Italian, French, English, German and Spanish because, she pointed out, “We do not have in Italian literature a work that brings together the Italian and vernacular names of flowering plants, much less do we have a polyglot vocabulary that collects the names of the most common flowering plants. This work that I have set out to do seems like modest and boring, but to me, it seems useful. Then, she led me along the garden showing me every corner of it, commenting on the flowers present at the time, the collections, explaining the origin of the various trees.
She spoke quietly and calmly, but with great authority. One could have spent hours and hours listening to her. Here, all this comes to mind now. Since I no longer have any pressing academic commitments, having reached that stage of life when it is possible and pleasant to cultivate one’s interests freely and time has stopped moving so fast that I seemed unable to grasp it, I thought of revisiting Eva Mameli’s entire oeuvre. I believe that her nonconformist and strong-tempered personality, which unlike that of Mario Calvino, her husband, has been too little studied until now, can be an example and a source of inspiration for students, for young professionals working in the field of floriculture, and also for all those who love nature.

“The women who have changed the world never had any need to show anything other than their intelligence.”
(Rita Levi Montalcini)

Women must always remember who they are, and what they are capable of. They mustn’t fear going through the endless fields of irrationality, or even being suspended from the stars, at night, leaning on the balcony of the sky. They mustn’t be afraid of the dark that engulfs things, because that darkness releases a multitude of treasures. That darkness that they, free, unleashed and proud, know like no man ever will.
(Virginia Woolf)